Chicken Majboos Recipe is an Arabic spiced rice dish that is serve with chicken. It is considered a national dish in Arabian Gulf State in the Middle East.

Just for your information, I was born in Kuwait and lived there for almost 18 years, and I learned so much about their history and culture. One of the most important things I learned is their food. Kuwaiti cuisine has one of the most delicious foods which is similar to most Middle Eastern and Arab Gulf countries. One of the popular dishes in Kuwait that is commonly served among Kuwaiti families in the house is Chicken Majboos.

Chicken Machboos, also known as Majboos, is their national dish of Kuwait which is commonly served with a local tomato garlic sauce called Daqoos. Furthermore, in the Arabic Gulf State, Majboos also has another name which they called it Kabsa. For example, in Saudi Arabia, their national dish is Chicken Kabsa despite they are using similar ingredients.

This is one of my favorite rice dishes which is very flavorful but not spicy. In this post, I will be showing you how to make an authentic Chicken Majboos Recipe.

The ingredients of Chicken Majboos Recipe requires specific spices needed to make this dish. Below are the list of important spices for Machboos

These spices mentioned above are commonly used in Arabic and in South Asian food recipes which can be found in Middle Eastern or Indian grocery stores. You must be specific when using these spices since it might ruin the taste of your dish. For example, you should avoid adding too much cumin or cinnamon since these spices are too overwhelming. Also, you can alternatively use a cinnamon stick if you like.

In addition to that, I am using chicken drumstick and chicken wings. You can use one whole chicken if you want since it does not make any difference. Also, other ingredients you need is onion and garlic. In this recipe, when you boil the chicken, you put the onion, garlic and the spices directly into the pot rather than frying them.

Lastly, one of the most important ingredients to make a delicious machboos or kabsa is basmati rice. In the Middle East, they use either basmati or other long-grain rice. I highly recommend basmati rice when making this dish since it gives a nice texture of the rice.

Can I use other protein instead of Chicken?

When cooking Majboos / Machboos, you can use chicken, lamb, beef, fish or shrimp. In Kuwait, I have tried eating shrimp or Fish majboos and it tastes delicious. When cooking Fish Majboos, the most popular fish they use is Zubaidi fish which is a white pomfret fish.

Of course, because I love chicken, I will be using this meat as my protein.

Things you need to know when cooking Basmati Rice

Before cooking the rice, you must soak the rice with warm water for 30 minutes. This will help remove the starch and prevent sticking the rice together. Also, this will help cook the rice faster since it will absorb the water during soaking.

Cooking Machboos takes a bit of time and it is not a simple dish to make but it is very delicious.

First of all, clean the chicken first, and then put it into the pot with water for boiling. While the chicken is boiling, remove the fats or dirt from the chicken. After removing the excess fats from the chicken, add the spices, onion, and garlic, and mix it well. Let the chicken boil for 45 minutes or until the chicken is cooked. Few minutes before you turn off the heat, add salt and black pepper. You have to put a lot of salt to make sure the soup taste salty. But don't worry, it will not be salty once you put the rice.

After the chicken is cooked, remove the chickens, onions, cloves, and other solid ingredients from the soup. Leave this soup as a stock for the rice. After the rice is soaked for 30 minutes, dry it out, and put the rice into the pot with the stocking. Add more water if the stock is not enough. While the rice is boiling, fry the chicken into the separate frying pan to have a nice brown color.

Once the chicken is fried, wait till the rice is cooked. After the rice is almost cooked, add the chicken and fried onion above the rice. You can optionally mix the rice or leave it that way and you are done.

Are you still confused? Don't worry, I have the full instruction of Chicken Majboos Recipe below 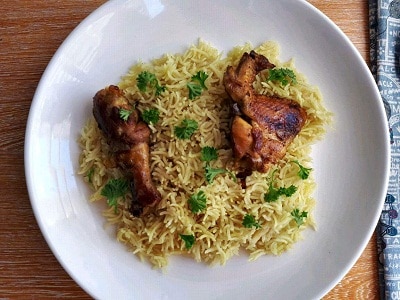 Calories: 300kcal
Keyword chicken majboos, majboos
Tried this recipe?Let us know how it was!

If you love Arabic or other middle eastern chicken dishes, I have other recipes you may love to try cooking at home