Korean Egg Drop Sandwich is a popular breakfast sandwich recipe that is made up of butter toasted thick brioche bread, fluffy egg, ham, cheddar cheese, and drizzle with sweetened mayonnaise. This Korean breakfast sandwich is so popular around the world that it becomes a trend on social media

The Word “Eggdrop” (에그드랍) comes from the name of the Korean sandwich restaurant that was introduced in 2017. It has become a popular street food among the locals in South Korea which started to expand to other countries. This restaurant offers different variation which includes bacon, avocado, and teriyaki filling.

As you know, the first time I heard about this breakfast egg sandwich was through TikTok which become so viral that it influences others to introduce that sandwich. Since in the Philippines we love everything about Korean culture (from TV dramas to foods), it is not surprising that one of the food stalls in Cebu City is selling this delicious Korean egg sandwich.

What is Egg Drop Sandwich?

This Egg drop sandwich is a Korean breakfast egg sandwich that is made from two slices of thick bread that are toasted in unsalted butter, and it has fillings of creamy scrambled egg, ham, and cheese which is drizzled with mayonnaise.

Traditionally, they use brioche bread because it is thick and fluffy. But in my opinion, you can actually replace it with other thick bread like French bread, white bread or milk bread. The texture is almost the same but the taste of brioche is a bit sweeter compared to other bread.

When I tried the Korean food stall in the Philippines that sells egg drop sandwiches, I noticed that they also have other fillings like kimchi bulgogi, bacon, ham, or avocado. But the main ingredient of the sandwich is the fluffy and creamy scrambled egg and cheese.

Lastly, this toasted Korean egg sandwich is served in a paper box which makes it more Instagram-worthy because of the color of the sandwich. Unlike serving on a plate, it makes it a bit boring.

Because I love egg sandwiches, this is what inspired me to make my version of this Korean breakfast sandwich. This recipe is a bit different than the traditional Korean egg drop sandwich but it is so delicious that I am sure you will love it.

Scrambled Eggs: I mixed 3 eggs with ¼ milk since not only does it makes it creamier and fluffier but it is much healthier than using cream

Ham: I am using chicken ham

Butter: I am using unsalted butter since this gives mild sweetness and it is used to toast the bread

Bread: You need to use any thick bread which I am using brioche bread with almonds. If you don’t have that type of bread, you can use French bread, milk bread, or white bread.

Cheese: In this recipe, I am using cheddar cheese. But you can also mozzarella, American or Provolone cheese

Lettuce: Now this is not traditional but I like to add lettuce as one of the fillings for my sandwich since it is healthy.

Drizzle Sauce: For drizzling the sandwich, I just used mayonnaise with sweetened condensed milk with a ratio 1:2

I. Making the Scrambled Egg

II. Heating the Ham and Butter the Bread

Other Korean Recipes to Try

If you love Korean foods, here are my other delicious recipes that you can make at home: 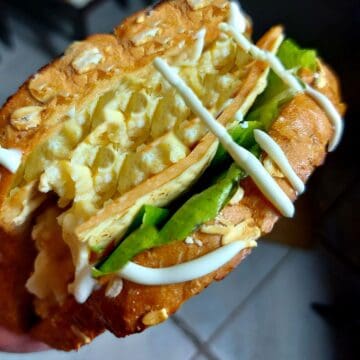