Makdous is a Levantine recipe which is a stuffed eggplant with walnut, garlic and red chili pepper cured in olive oil. It is a popular eggplant dish in Jordan, Lebanon and Syria which is eaten breakfast or dinner.

When I was in Kuwait, we had our dinner in my late grand father's house. We were eating middle eastern food, and most of these foods were eaten using pita bread. I noticed one of the foods we eat is a lebanese pickled eggplant called Makdous.

Levantine and Middle Eastern food offers some of the best and healthiest food in the world. Some of their foods contain spices and olive oil which makes the dish healthy. Specifically, in the Levantine region (Palestine, Jordan, Syrian, Lebanon, and Israel), their diet is similar to the Mediterranean and Spanish diet because of the high uses of olive oil.

Today, I will be making you a delicious healthy Makdous Recipe. In English, Makdous is a pickled eggplant that is it is soaked with olive oil. And it is mix with walnut, garlic, and red chili flakes. Furthermore, Makdous Recipe is a popular dish among Syrian, Lebanese, and Palestinian locals.

To make a Makdous recipe, you need a baby eggplant or aubergine and this is a MUST. Because I am living in a tropical country in the Philippines, long eggplant is the only eggplant that is available in this country, which is one of the obstacles of making this recipe. To resolve this, I just slice the long eggplant into two pieces to make sure it can fit into the jar.

Furthermore, you need garlic, walnut, and red chili flakes for seasoning and filling the eggplant. Also, you need salt for boiling the water, and for removing the excess juices of the eggplant, which I will be explaining how in the next paragraph.

Lastly, one of the most important ingredients you need is Olive oil. The olive oil will be used to soak the eggplant in the jar. The jar must be filled to help maintain the quality and increase the life span of Makdous.

What are the Kitchen Equipment or Utensil needed

What to serve this pickled eggplant with?

This Makdous is usually served as part of a Mezze platter which you serve with other Middle Eastern appetizers or side dishes. It is commonly eaten during breakfast or dinner.

Example of assorted dishes I like to serve as part of a Mezze platter includes my Cheese Manakish, Zaatar Bread, Scrambled egg, Hummus, Baba Ganoush, Olives, and other Pickled vegetables.

Also, this pickled eggplant is eaten using Kuboos or Arabic pita bread which is a popular staple food in the Middle East and Arab countries.

This Eggplant is nutritious since it is rich in potassium and fiber. Furthermore, the extra virgin olive oil, that is poured on the eggplant, is healthier than most cooking oil since it is rich in monounsaturated fatty acid- a type of fat that helps reduce the bad cholesterol in your body.

2. How long does Makdous last in the fridge?

If the pickled eggplant is fully submerged in olive oil and is properly stored in a clean jar, then this will last for up to 1 year. If it isn’t fully covered in olive oil, this will put you at risk of forming a mold.

If you enjoyed this Levantine stuffed Eggplant, then here are other stuffed vegetables recipes to try: 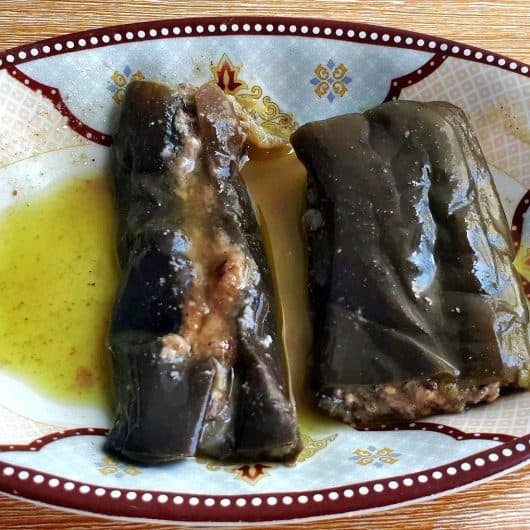