Chicken Fatayer is a Middle-Eastern meat pie recipe that has fillings of chicken, bell pepper, and different spices. This is considered our Arabian version of an empanada.

If you visit Arab countries, you will find in most street food stalls and restaurants they sell fatayer. This meat pie is usually eaten during breakfast, snacks, or sometimes dinner. If you tried an empanada, then I promise you will find this food delicious.

When you go to the food places, you will know there are different kinds of fatayer. You can choose meat, vegetarian or cheese pie. If you followed my food blog, you will know I have already made spinach fatayer, and cheese fatayer

Now in this blog post, I will like to share with you a Middle Eastern meat pie called chicken fatayer, which is a flavorful pie that is rich in different spices.

Recipe Ingredient for the Chicken Fillings

For the recipe ingredient of the chicken fatayer, I use different spices, vegetables and other important stuff needed:

Recipe Ingredient for the Dough

To make the dough, it is basically the same ingredients when making spinach fatayer, cheese pide, pizza and most bread recipes:

To cook Chicken Fatayer, there are 3 things to do: Making the Dough; Cooking the Chicken Fillings, and Assembling the Fatayer.

I. Making the Dough

To make the dough, you first mix water, brown sugar, and yeast. And then transfer into the bowl together with the flour and salt. Mix everything, and then add olive oil.

Continue mixing, followed by kneading for several minutes until it forms a nice fluffy dough. Cover it and set aside for 1 hour till double in size.

To make the chicken fatayer fillings, I add olive oil to the pan. Once hot, add the garlic and onion and stir till it turns translucent. After that, I add the chicken breasts and let them cook till there are fewer juices followed by adding the bell peppers.

Next, I add the spices, grated carrots, and mayonnaise. I stir to mix one more time before turning off the heat.

In this part, I divide the dough into 12 pieces and shape each of them into a ball. To make sure it grows, I cover it with a towel for 10 minutes.

In each dough, I use the rolling pin to make it into an oval-shaped dough, and I stuff it with chicken fillings (estimate how much you want) and mozzarella cheese. After that, I pinch them together in the center to close the edge of the dough.

Now turn to the opposite side, and push it down to form a flat bun-like bread. Next, I transfer the meat pie into the tray, brushed it with egg yolk, and added sesame seeds.

Lastly, transfer it into the oven and let it bake for 10 to 12 minutes at 200 C or 390 F. In my experience, this will be enough to turn into a golden brown. And you are done.

1. Can I add other cheese if I don't have mozzarella cheese?

2. How long can it last in the fridge or freezer?

You can store it in the fridge for up to 7 days, but I don't advise in the freezer because the bread will turn soggy because of the moisture from the ice.

3. Are there any healthier variation for this recipe?

Instead of all purpose flour, you can use whole wheat flour which is healthier since it is rich in fiber

Here are other related Middle Eastern Dough that are delicious: 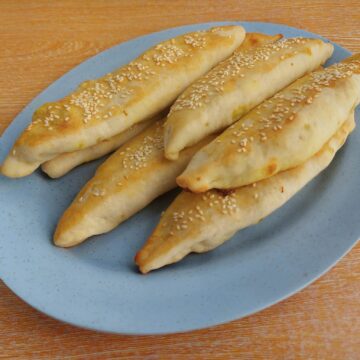