This Maqluba Recipe is a popular Palestinian and Jordanian spiced rice dish that is mix with fried cauliflower, eggplant, potatoes, and meat. In Arabic, Maqluba (Makloubeh or Maqlooba) means "Upside Down" since we take the pot and flip it upside down directly on the large plate.

As a half Jordanian (from my father's side), this dish is part of our culture and heritage and I love Maqluba which is one of my favorite Jordanian / Palestinian rice dishes. Although it is a national dish of Palestine, this food is also found and eaten in Jordan and even in Syria & Iraq.

I remember back in the old days when I was living in Kuwait, we have a family gathering every Wednesday or Thursday in my Grandparents' house at Lunch Time. My late grandmother made this delicious Chicken Maqluba and I saw her flipping upside down into the large serving platter. My father jokingly told me that it is considered a Jordanian/Palestinian version of Paella since it is also served on a large plate.

Fortunately, my grandmother taught this recipe to my mother, and I learned it from her. Because I love this Jordanian chicken dish, I am going to show you a true authentic Chicken Maqluba.

Making a Maqluba Recipe is not easy since it takes effort and time.

Can I use other meat for this recipe?

Traditionally in Jordan and Palestine, it is more popular to use chicken for maqluba recipe. However, you can also use Mutton and Beef instead of chicken. One time, my father's relative made a Lamb Maqluba in his house, and it tastes delicious.

The only problem you will have to boil the Beef or Mutton a bit longer to make sure the meat will be tender and moist. For this reason, I prefer to use chicken since it is easier, and it is my favorite meat.

What do you serve this recipe with?

When eating Maqluba, this food is commonly served with plain yogurt and Arabic salad. The yogurt provides great condiments for this rice dish. While the salad well serves as a healthy vegetarian side dish.

I will admit one thing. This rice dish is very delicious but it is also a bit oily. So it is important to serve with something healthier like Arabic Salad. These two side dishes are a must and you cannot eat Chicken Makloubeh without them.

Alternatively, you can use garlic yogurt sauce instead of plain yogurt. They taste delicious.

I. Boiling & Seasoning the Chicken

The first thing to do you will have to prepare a large pot where you will put the chicken and pour water for boiling. Once the chicken started to boil, remove the fats using the big soon.

After that, add the baharat spices / garam masala, allspice, turmeric, salt and black pepper in the pot, and give it a slow stir. The chicken broth will have to taste a bit salty since you will use that to pour into the rice and the vegetables. Let the chicken boil for 30 minutes.

II. Frying the Vegetables and Chicken

While the chicken is boiling, chop the cauliflower, potatoes, and eggplant (long shape). Add vegetable oil in a separate pan to prepare to fry them. Once the oil is hot, fry first the cauliflower until it shows a light brown texture. After your done with the cauliflower, proceed with potatoes and the eggplants.

Once the chicken is cooked, remove the chicken from the stock and prepare again the vegetable oil in the same pan. Fry the chicken in the pan until it has a brown texture. Flip on the opposite side and repeat the process.

Lastly, turn on the gas stove in medium high heat to the let the maqluba boil. When the water is already absorbed, switch it to low heat, and let it cook for additional 15 minutes or until the rice is soft. Turn off the heat and let it cool for 5 minute.

In the mean time, prepare a large plate on a table. Bring the pot to the plate and quickly turn into upside down position. Slowly lift it up to have a beautiful layer of Maqluba. Serve it with Salad & Yogurt and you are done. Bon Appetit!

If you are looking for similar Arabic and Middle eastern dish that has a combination of rice and meat (chicken, lamb or beef), I have other recipes you may love to try cooking at home: 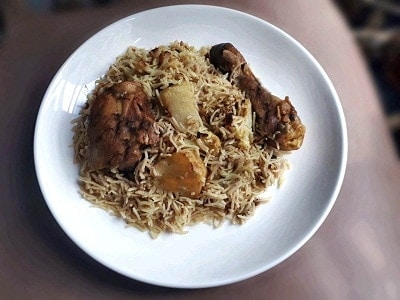 Spices for this Recipe